The Holy Mother of the Rosary Cathedral welcomes people of all ethnic, racial and social backgrounds.  Our beliefs are based on Holy Scripture, Christian Tradition, and Church Ecumenical Synods.  The HMRC is the Cathedral see of the Buffalo-Pittsburgh Diocese of the Polish National Catholic Church.

What is the Polish National Catholic Church?

We wish to make it clear that we are not a new Church. We adhere to the One Holy Catholic Church founded by Jesus Christ. Our organizer, Bishop Francis Hodur wrote in the 1930’s “As a human organization, the Polish National Catholic Church came into existence among the Polish people in emigration in America in 1897, but as a Divine Institution, it existed from its establishment by Jesus Christ in Jerusalem.”

In the 19th century many people immigrated to the United States including Poles, looking for economic, political and religious freedom.   They faced persecution, economic struggles, and in their churches they were forced to give up their well established and long held religious traditions. They were seen as “contributors” in their parishes and were given no say over how their sacrifices were used. They stood up and decided to organize a Church that maintained its historic faith while simultaneously being democratic. A Church in which each member, had a voice and a vote.

The Church’s apostolic succession, orders, and sacraments are recognized by the Roman Catholic and Orthodox Churches.

A CATHOLIC CHURCH… accepting as dogmatic the first Seven Councils of the undivided Christian Church.

AN APOSTOLIC CHURCH…preserving the Apostolic Succession, an unbroken line of bishops from the Apostles of Jesus Christ to the present day bishops and priests.

AN ECUMENICAL CHURCH …reaching into the community and cooperating with others Churches to make your city or town a better place to live. At this time much positive dialogue is going on between representatives of the Anglican, Orthodox, Roman Catholic and Polish National Catholic Churches.

1) Do I have to be of Polish heritage to belong?

NO! Although the church has its roots in the Polish immigration (at the end of the 19th century) it is an international Church made up of members from different nationalities and many ethnic backgrounds.

2) What is the central act of worship in the National Catholic Church?

The Holy Mass is the central act of worship in all churches of the Catholic Community, including the National Catholic Church. The Mass is the Sacrifice of the New Testament and is celebrated completely in the language of the people.

3) How is Holy Communion administered?

Holy Communion is given under two forms, Bread and Wine, which are the Body and Blood of Jesus Christ. The principal method used is intinction, which simply means that the Sacred Host is dipped into the Consecrated Wine and administered to the faithful at the altar. Only Priests and Deacons administer the Eucharist and it is always placed on the tongue, not in the hand.

4) What does the church teach concerning confession?

A humble confession of our faults to the Almighty God, followed by the assignment of penance and absolution given by the priest, is the way the congregation obtains forgiveness of its sins. The sacrament may be administered in one of two ways: public or private. Private confession is required for all members under the age of sixteen. Public confession is a part of every Mass. In this form , the faithful confess their sins directly and privately to God. The entire congregation then c=recites the Prayer of Confession together.

5) What is the teaching concerning birth control?

The utilization of birth control is a matter of personal judgment for husband and wife. It is not the responsibility of the church to tell its communicants how many children they must or must not have. Marriage serves other major purposes besides the procreation of children.

No. Abortion is morally wrong, for it is the ending of a life that has already begun. The church does not sanction it.

7) Can a divorced person participate fully in parish life?

Yes. There are no discriminatory regulations against those who have suffered from a divorce; divorced people may participate in Mass and receive Holy Communion. The Church has an obligation to lend its support and ministry to those who have divorced, as it would to casualties of other social ills.

8) Can a divorced person re-marry?

Yes, Each Diocese has a Matrimonial Commission that studies each request for marriage by persons who have been divorced. This Commission presents its finding to the Diocesan Bishop with its recommendation. The Bishop makes the final decision.

9) Why do we permit priests to marry?

Because it is a perfectly natural thing for a man to do. The church sees no moral reason to forbid a man to receive the Holy Sacrament of Matrimony simply because he is a priest. Tradition tells us that all but one of the twelve apostles were married. Popes, bishops and priests of the early church were all married men. Many believe that a married priest is more likely to understand the problems of marriage and child rearing because he has gone through them.

10) How is the National Catholic Church governed?

It is governed in accordance with its Constitution. In matters of faith, morals and discipline, bishops and priests possess the authority to explain and reach the doctrinal position of Christ’s Church. The legislative authority of the Church is vested in the General Synod, the Special Synod, the Diocesan Synod and the Parish Meeting. In financial and administrative matters, the Parishioners possess administrative levels: parish, diocese and church-wide. Synods are required by the Constitution to be held every four years. Diocesan Synods are held between General Synods.

11) Duties of Parishioners: Members of the Church have a twofold duty: Spiritual and Material.

1) Comply with enactments of General, Special and Diocesan Synods

2) Comply with financial obligations adopted by the Parish, the Diocese and the Church

Read This Weeks Bulletin and Schedule for the week 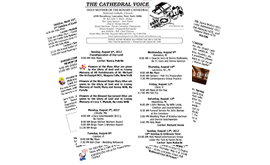 Coffee Hour - to be announced.

Children’s School of Christian Living - to be announced.

Verse of the Day